If you’re like most people, there’s probably an area in your life where you’d like to boost your confidence. And here’s the good news… increasing one’s confidence is much easier than you might imagine.

Most of us have tried all sorts of strategies to deal with the critical voices that erode our confidence. You know the ones that tell us that were not enough, that we’re unworthy or undeserving. And often times we don’t even hear a verbal message but are just flooded with the emotions of insecurity and fear.

Doing this helps reduce the emotional charge and makes it easier to move into a more neutral position. Once you’re feeling a little more centered then…

If your critical voices are really loud it can be quite difficult to access compassion to calm all this noise down. If you really want to be free quickly you may want to consider a private session.

In the meantime, be gentle with yourself, and breathe.

What is a pattern?

by Karen Heywood | Articles, Patterns, What is a pattern?

Throughout my personal journey I have explored many different forms of healing. However, I was repeatedly disappointed to find that the deeper patterns always found to a way to reassert themselves. This drove me on, searching for understanding, for answers, searching for a way that actually worked.

It wasn’t until the Art of Embracing  began to unfold through me that I began to understand that patterns are more than just computer-like programs. Each pattern actually contains a part of our Beingness that has been split off, become separated. It’s a fragmented part of our Essential nature that has been rejected by others, and then, by ourselves. In fact, every pattern contains a part of our Beingness that’s been locked away, banished. And just as we feel the pain and hurt of rejection, so does it.

I then understood why pushing against a bad feeling/pattern – trying to make it go away by ignoring it, avoiding it, or concentrating upon its opposite – doesn’t work for very long, especially with the really deep issues. Repeated rejection only serves to feed the pattern, giving it more power over us.

With this understanding I began to shift all the judgment, resistance and aversion I had held in relation to disruptive patterns. I began to approach disruptive patterns from a place of heart-felt compassion rather than trying to change or get rid of them. As I learned to perceive them as Living Beings, as patterned Presences, their defences softened. As I stayed present with whatever was arising they would relax, expand and ultimately dissolve within this complete acceptance, this embrace. As they dissolved, this space would be filled with Expansiveness, Light or Beingness.

And the shift is permanent! The pattern doesn’t  re-emerge. Needless to say I was absolutely thrilled, ecstatic! I’d finally found a way that really works!

Definition of Procrastination: to put off the doing of something that should be done.

There are degrees of procrastination. In the milder form, it really is simply putting off the doing of something until tomorrow. And when tomorrow arrives, you get on it and get it done.

With the more challenging forms of procrastination, we’re putting off something until tomorrow but never seem to get around to the doing. And, we’re in conflict around this inaction. One part of ourselves wants to get a specific something done. But, there’s another, stronger aspect that is doing everything in its power to put it off or avoid it.  And we don’t understand why we’re avoiding ‘it’.

This is when the internal critic usually chimes in with its debilitating remarks. Comments like, “I’m lazy!” “I’m so stupid!” I can’t do anything!” “What’s my problem?”

Bottom line, there’s a war going on between these two factions… the part that wants to get ‘this’ done, and the part that’s averse to doing ‘this’. We’re fighting ourselves. And this internal battling eats up a lot of energy. In fact, it can be completely draining and exhausting.

So how does one resolve procrastination?

Sometimes just by being present with that part of ourselves that has been causing us problems is all that’s needed. Sometimes, that resistance simply dissolves before our eyes and we’re able to move forward with ease and grace. And other times we need to repeat this process numerous times before that resistance dissipates.

There is an even faster way through energetic clearing. For more information about this please click here.

Being an empath ~ a gift & a curse

Being an empath can feel like a curse until one masters this innate ability to pick up on other people’s energies. Until this is mastered empaths are often unconsciously influenced by others’ thoughts, feelings desires, and emotional states.

As children many of us discovered that if we were ‘good’ the people around us tended to be calmer and easier to be around. And even though we didn’t really enjoy putting our desires on the back shelf, it was better than trying to deal with the incredibly uncomfortable emotions that arose when we went against what others wanted. This is how many of us ended up becoming people pleasers. It wasn’t so much that we wanted to please others, but rather we wanted to avoid the pain we feel in the presence of others’ emotional upsets.

We learned that we could (sort of) control the emotional reactions of others by acquiescing to their desires.  Unfortunately in the process of doing that many of us lost sight of our Center (our sense of Self, our Higher Self) and our desires.

The real solution to this overwhelming discomfort is learning how to manage this empathic ability so that it works for us. I have found 4 key abilities that have helped me, and my clients, better manage the energies.

I have found that #4, releasing patterns and beliefs that cause you pain is the fastest way to achieve 1, 2, 3 & 4. When a pattern is released one easily and naturally becomes more attuned to one’s Beingness (Soul, Spirit, Higher Self). Immediately, people feel more comfortable in their skin. And it becomes not only easier to be here, but actually enjoyable!

How do you treat yourself more lovingly?

It’s easier than you think!

When we think about treating ourselves more lovingly, resistance can arise. This is because the majority of our associations with love have been conditional. Conditional love says, “I’ll love you if… you act the way I want you to act, dress the way I want you to dress, etc., etc.” We received this message repeatedly in childhood, through religious training, mainstream media, and music.

Solution… bypass all the conditional programming!

This is the easy part. Recall a memory where you felt appreciation. I’ve found it easiest to access appreciation through my memories of being in nature… a beautiful sunset, hearing a hawk in the distance, or watching animals play. Spend 3 to 5 minutes (or longer) hanging out in that memory. Focus your attention upon the good feelings and anything that amplifies those good feelings. When I spend time with these memories, energetically I’m amplifying those good feeling-experiences in my personal energy field. And what’s cool is that science is now proving that spending time in good feelings actually affects our physical body in a positive way. And, when I hang out in those good feelings, amplifying them in my personal energy field, I naturally attract more people, situations and opportunities, that external stuff brings even more good feelings into my experience.

Try this upon arising in the morning…

When I do this appreciation exercise upon arising in the morning my day unfolds in a much more harmonious manner. It took a little practice but as I continued to practice, those good feelings became easier to access and I experienced that goodness more and more deeply every day. Have fun with this. Don’t make it a chore. Look for things that evoke appreciation and it’ll become easier and easier. Enjoy!

What to do when you’re triggered

by Karen Heywood | Articles, Being triggered, Centered, Embrace, Exercises, How to get centered, Triggered

The experience of being triggered can be very much like being sucked up by a tornado, caught in its swirl. Everything is spinning so fast and so crazily that we’re unable to think or see clearly. When we’re caught up in this swirl it can be very difficult to make a different choice. There’s often an overwhelming feeling-experience of panic or fear. We feel  it happening. Often we know we’re caught. We know we’ve been triggered. However, when we’re caught up in this whirlwind, it can be difficult to shift out of this crazy state.

When we’re triggered, the first thing to remember is that this is actually a fantastic opportunity. This issue/pattern is arising because the life force that enlivens this pattern (which is a part of our Essential Beingness that got separated off) desires to be freed so that it can express more fully within our physical experience.

How to get back to Center

When we’re adept at embracing we’re able to shift back into our Center at will. 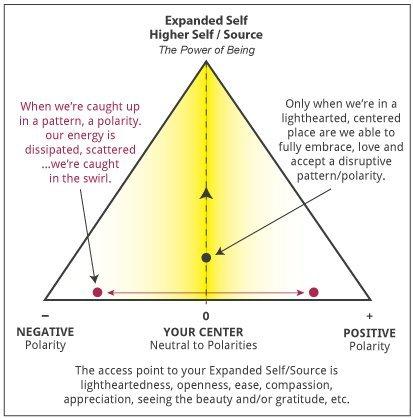 If we’ve been triggered it’s impossible to embrace that issue if we’re not in our Center. If you are finding it challenging to get back to your Center it’s easier to first shift your attention to something that makes you feel better. The objective is to shift out of the overwhelm, panic, fear or tension and access the higher vibrational feelings of openness, ease and relaxation.

Unfortunately simply finding our Center doesn't usually dissolve the trigger. However, once we're back in our Center then we can embrace that energy form, that trigger.

And the good news is that each embrace and subsequent release makes it even easier to get back to Center. As we get clearer it also becomes easier to discern the subtler qualities of an impending “spin” and embrace the issue “on the fly” before we get sucked into the “swirl”.

And, just in case you’re not familiar with the embracing process, it produces real, measurable results. It guides participants through the process of how to shift into Center as well as how to release patterns and triggers.